As the astronauts aboard the International Space Station (ISS) baked the famous DoubleTree by Hilton chocolate chip cookies – making them the first ever food baked in space – the aroma wafted through the space station, adding a reminder of the simple joys of home to an experiment designed to make long-duration space flight more hospitable.

This first-of-its-kind experiment took place over the course of several days as a result of a partnership with Zero G Kitchen, proprietors of the first space oven, Nanoracks, a leading provider of commercial access to space, and DoubleTree by Hilton. The experiment also marks Hilton as the first hospitality company to participate in research aboard the ISS. Highlights of the experiment were captured aboard the ISS and are available to view here:

Following the Nov. 2 launch from NASA’s Wallops Flight Facility in Virginia, ISS Commander Luca Parmitano of the European Space Agency baked the brand’s cookie dough inside the prototype oven, one cookie at a time, as fellow crew members, including NASA astronaut Christina Koch, checked on the progress.

We made space cookies and milk for Santa this year. Happy holidays from the @Space_Station! pic.twitter.com/sZS4KdPmhj

The average DoubleTree chocolate chip cookie bakes in a convection oven for 16-18 minutes at 300 degrees Fahrenheit on Earth, but there was no recipe for baking cookies in orbit.

Astronauts on the ISS were directed to adjust the bake time for each of the five cookies (the first four at 300 degrees Fahrenheit and the fifth at 325 degrees Fahrenheit) to determine the ideal conditions in space. The first cookie baked for 25 minutes and was still under-baked. The second cookie released a fresh-baked cookie scent in the ISS after baking for 75 minutes.

And while some had speculated that without gravity the cookies would be more spherical, the initial shape and consistency of the DoubleTree chocolate chip cookies appeared the same in space as they are on Earth.

“Perfecting the baking process for our DoubleTree cookies took time, even on Earth, so we were excited to learn that our cookies appear to look and smell the same on the ISS as they do in our hotels,” said Shawn McAteer, senior vice president and global head, DoubleTree by Hilton. “The innovation displayed throughout this experiment and emphasis on making long-duration space travel more hospitable underscores our ongoing commitment to ensuring guests always have a comfortable stay, wherever they may travel.”

“While we have initial visual and scent feedback from the crew aboard the ISS, we’re excited to dive into fully understanding the baking results – including breaking down why the bake time and temperature in space varies from what we are used to seeing on Earth, as well as if the baking tray, which was designed specifically for microgravity, impacted the final shape of the baked cookies,” said Mary Murphy, senior internal payloads manager, Nanoracks.

Three of the baked DoubleTree chocolate chip cookies, as well as other experiments and cargo, returned to Earth on the SpaceX Dragon spacecraft at about 10:41 a.m. ET on Jan. 7, 2020. The DoubleTree chocolate chip cookies will soon undergo additional testing by food science professionals to determine the final results of the experiment, which will help scientists further future efforts to make long-duration space travel more hospitable. DoubleTree by Hilton plans to preserve the cookies where visitors can view them and learn more about this experiment and has offered to donate one to the Smithsonian National Air and Space Museum where it is being considered for collection.

“We are thrilled to see our oven, the first part of the space kitchen we set out to build more than two years ago, be used to bake food in space for the first time,” said Ian Fichtenbaum, co-chef and co-founder, Zero G Kitchen. “We already know the results of this experiment are sweet, and we look forward to now understanding how our oven and the cookie findings may build a new frontier for hospitality.”

As a part of DoubleTree by Hilton’s commitment to inspiring the next generation of travelers to pursue careers in hospitality, the brand partnered with Scholastic to develop an educational program related to hospitality in space for 50,000 middle school classrooms across the United States. The program and accompanying curriculum, which includes a lesson and activity sheet, focuses on better understanding the challenges of living and working in space, and encourages students to think creatively about what innovations need to occur to ensure long-duration space travel is comfortable and hospitable.

To further celebrate this historic moment, beginning January 20 and running through February 10, Hilton’s more than 100 million Hilton Honors members will have the opportunity to bid on an out-of-this-world experience at the Kennedy Space Center Visitor Complex in Florida using their Hilton Honors Points. It includes a private guided tour with a veteran NASA astronaut, reserved seating in the all-new Dine With An Astronaut and shopping in the world’s largest Space Shop. 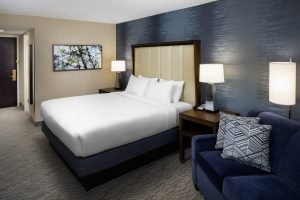 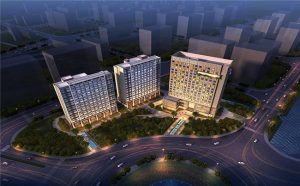